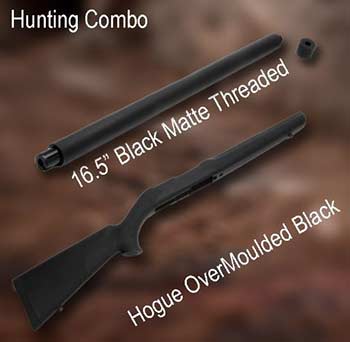 In the first installment of this project, I had my receiver, but hadn’t yet selected a barrel and stock. At my favorite local store, the options were pretty slim. They had the Hogue stock I was looking at, but the only barrels they had were in the wrong color. Meaning they weren’t black. So after giving them first shot at the “Take my money!” game, I went online. I’d already been eyeing an AccuLite barrel from WhistlePig GunBarrel Co, so they were my first stop. Turns out they had a special – the Hogue OverMolded stock, and a 16.5″ Black Matte Threaded barrel for $222.75 + shipping. Done! **Note that WhistlePig is now known as Acculite22.com.**

Two days later, my barrel and stock arrived. They were both packed well, and there was even a strip of emery cloth included. Per the instructions, the barrel should fit snug. If it’s too tight, sand a bit at a time, all the way around the shank, then test fit. Before I could do that, I had to clean up some heavy paint in the receiver with my Dremel. Once that was done, the barrel fit with two passes of the emery cloth. I wiped it clean, put a little oil on it, and made sure the extractor notch was in the correct location. When tightening the barrel v-block, I do a little at a time for each bolt. Once it’s good and snug, with the barrel fully seated, I back off a few turns. Final tightening is done with a torque wrench set to 10 inch/lbs.

With my barrel installed in the action, I reinstalled the factory bolt, charging handle, and trigger group. After centering the safety, I dropped it into the Hogue OverMoulded stock. The fit was snug, but not much trouble. No action screw is included, so the original Ruger one was used. That was torqued to about 15 inch/lbs. You can see in the photos what a close fit the action and barrel are to the stock. Yet there’s still room for a crisp dollar bill between the stock and barrel, for those who worry about free-floating. I’ve read that some folks have had to sand the channel of the stock though.

*The photo above was taken with evening sunlight coming into my office window. The stock is black, despite the warm look of the image.

Now that it looked like a rifle again, I added a cheap bipod. I have nothing against expensive bipods, by the way. I just needed something functional for mounting the scope and taking photos. This is a 6 pound (+/-) .22, so it doesn’t need much support anyway. With scope and rifle in hand, I went back to my local shop. They helped me choose some rings, which I used to install my scope. It’s the Vortex Crossfire II, 4-12×50. As mentioned, I like these for many reasons, including the variable objective. Also, it’s what I had on hand.

WhistlePig’s product code for this $176 barrel is 16TNF-BM. It’s a LR (long rifle) NF (no flutes) TH (threaded muzzle-end w/protective cap) solid anodized .920 barrel. That’s a 6061 aluminum sleeve over a 4140 steel barrel liner. The liner is .050 thick, button rifled, 6 groove, 1:16 twist with a Bentz chamber. AccuLite barrels weigh approximately 1 ounce per inch. I didn’t weigh mine before installing, but that would put it at 16.5 ounces. Since the factory barrel weighs 28.7 ounces, we’ve cut 12.2 ounces, or 3/4 of a pound off this rifle. Right away, it feels lighter and more balanced.

Not to put my journalistic integrity at risk, but I totally failed on the specs for the rings. I used a gift card, and bought a ton of ammo at the same time. And I didn’t keep the receipt. So we’ll guess $20, and the weight is negligible. I’m only including the 11 ounce bipod (under $20 on Amazon) for informational purposes. We shoot off a rest or a bag, so it’s pretty much just for photos and maintenance.

As I finished writing this article, the rifle has already been to the range twice. And I have results to share, along with the next steps. But there will be no spoilers, you’ll have to check back for an update. And as always, any comments, feedback, or suggestions are welcome.